What Is The Average Lifespan Of An Alcoholic?

A 2014 study found that the life expectancy of an alcoholic was between 24 and 28 years shorter than the average lifespan of the general population [2]. 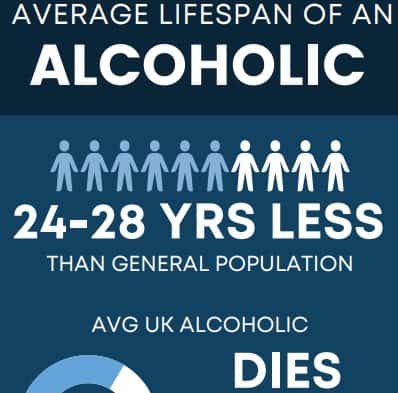 Combined analysis in 2018 by Angela M Wood PhD et al found that drinking more than 100g of alcohol each week - equivalent to five pints of beer or large glasses of wine - led to a reduced lifespan of between 6 months to 4-5 years [3].

For example, a person drinking between 2 and 3 pints of beer a night will likely die 5 years sooner than someone who sticks to the recommended government guidelines of 100g per week [10].

The World Health Organization found that 3 million deaths every year are caused by the harmful use of alcohol [9].

People between the ages of 20 and 39 are the largest age group affected, as 13.5% of all deaths are alcohol-related [9].

Statistics state that there were nearly 9000 deaths in the UK in 2020 with alcohol-specific causes [4]. 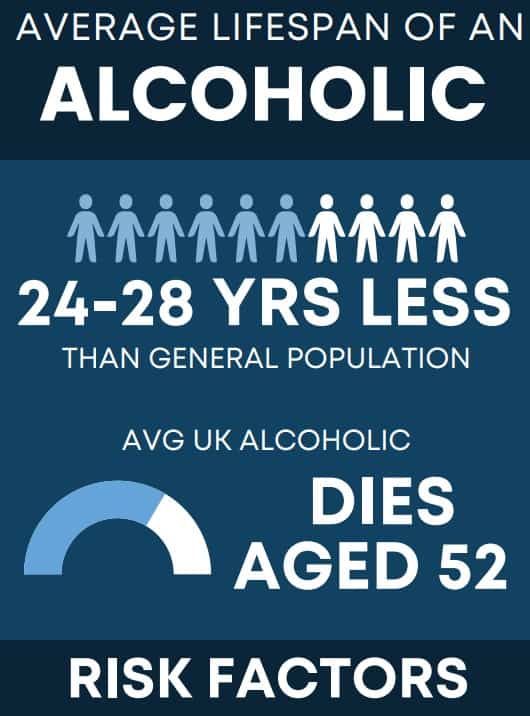 How Does An Alcoholic's Physical Health Impact Their Average Lifespan?

Alcohol abuse increases the risk of life-threatening diseases, such as fatty liver, cirrhosis, and coronary heart disease [5], which, in turn, reduce expected lifespan.

A 2020 study showed that cirrhosis and heart disease place a "serious burden" on the body, which can significantly impact an alcoholic's life span [11].

Drinking alcohol can lead to the development of at least seven types of cancer, including bowel, mouth, throat, and breast cancer [28].

An individual diagnosed with liver cirrhosis has an expected life span thereafter of around 12 years [12].

Most alcoholics are diagnosed with liver disease between the age of 30 and 40 [13], giving an expectation of, at best, 52 years of age.

The Office For National Statistics [4] found that most alcohol-specific deaths are linked to health problems directly caused by alcoholic liver disease - this accounted for 96.1% of all alcohol-related deaths.

There is currently no cure for cirrhosis - liver disease - but giving up alcohol in time can significantly increase a person's chances and help to reduce their symptoms [7].

Research suggests that there is a positive correlation between alcohol use disorder and cardiac disease [25], accounting for over 30% of deaths.

Moderate drinkers (more than 7 drinks per week) are significantly more likely to suffer from a stroke than light drinkers [26].

Research also suggests that drinking at this level often can lead to weight gain, putting unnecessary strain on the heart and leading to heart failure [8].

Although there is no cure for heart disease, making lifestyle changes and avoiding alcohol can increase life chances, and mortality rates can be improved [27].

How Do Lifestyle Factors Of An Alcoholic Influence Average Lifespan?

Alcohol misuse can reduce life expectancy further due to an increased risk of drunken injuries, with 976,425 people hospitalised for accidents linked to drunk driving, alcohol poisoning, and accidents caused by drinking too much alcohol in 2019 [24].

Equally, in 2019 there were 19,190 alcohol-related deaths in England [24] - these are defined as deaths that would not have occurred if not for alcohol abuse or alcohol addiction - therefore reducing the expected life span of those suffering from alcohol use disorder.

Drink driving statistics [6] show that in 2021 there were 210 fatal drunk driving accidents in the UK and 1300 serious accidents.

This means that drink driving leaves you with a 16% reduction in life expectancy and risk of a fatal accident from drink driving [27].

Patients admitted to the hospital are also much more likely to exhibit violent, reckless behaviour, with some chronic drinkers even exhibiting suicidal behaviour due to developing mental health disorders [5].

This in itself reduces life expectancy, as sufferers were up to 7 times more likely to die before the age of 75 [28].

There were 525,000 incidents of violent crime where the offender was under the influence of alcohol in 2020 [23], which therefore has a direct link to fatal accidents and the expected life span of an alcoholic.

Those who drink alcohol excessively are also much more likely to suffer from social problems, including unemployment, domestic abuse, and homelessness which can lead to poor nutrition and living in high-risk environments [5].

Research from the Imperial College London [19] suggests that this living environment can reduce life expectancy by a further 2.1 years and the life expectancy of those living without a home is as low as 45 years old [20].

With 66% of people experiencing homelessness stating that drugs or alcohol was a contributing factor [21] - it is clear how this impacts overall life expectancy.

Can An Alcoholic's Lifespan Be Increased?

Although alcohol addiction negatively impacts on mortality, this doesn't mean that an alcoholic's life span can't be improved by making lifestyle changes.

Medical experts suggest that although damage cannot be undone, it can prevent further damage and "significantly increase your life expectancy" [15].

By following a specific treatment programme involving reducing alcohol consumption by 10% every four days [16] and adjusting diet to increase nutrient deficiencies often found in alcoholics [18], individuals are able to reduce the serious damage and symptoms caused to both the liver and the heart, improve the immune system and therefore increase life expectancy [7].

Equally, reducing alcohol intake can increase a person's average life expectancy as there will be a decreased risk of fatal accidents occurring [6].

Studies suggest that maintaining sobriety for 7 years minimum is the best way to minimise any permanent harm to a person's physical health [17].