Foods that ferment contain a certain amount of alcohol [1].

This includes everyday food like rye bread, bananas and yoghurt [2]. 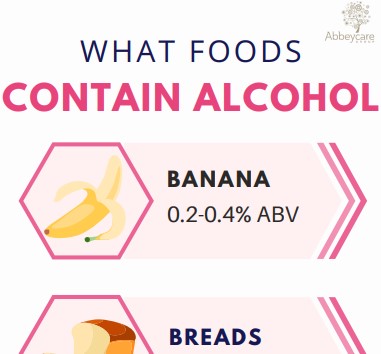 Foods That Contain Alcohol (including ABV [alcohol by volume] %):

Alcohol in everyday food can fluctuate by volume depending on the item and how long it ferments before consumption [12]. 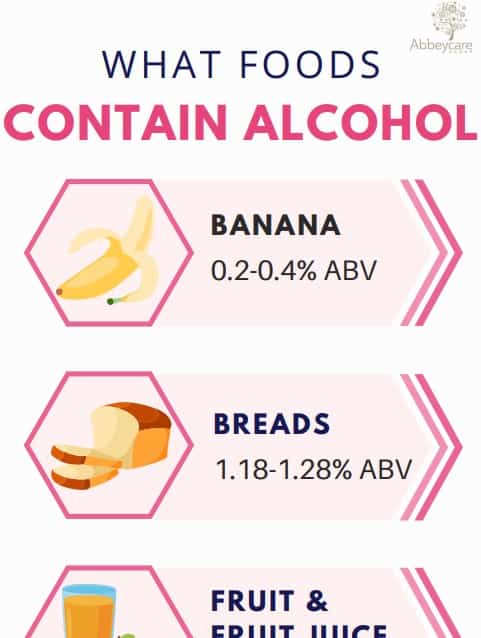 Conventional breads are generally leavened with baker's yeast to kick-start fermentation and reduce the time it takes to bake a loaf from start to finish [14].

All breads that are yeast-based contain alcohol in varying degrees, whether commercially or traditionally prepared.

Fruits or fruit juices such as litre grape juice or litre orange juice will increase in alcohol levels as time passes and the beverage or fruit remains unconsumed [15].

Certain groups, especially children, may be affected by the consumption of large volumes of fruit juices.

Yogurt and kefir contain alcohol due to the microorganisms that feed off the milk's natural sugar, lactose [17].

These bacteria, including Bifidobacterium and Lactobacillus, seem to have a complimentary effect on the gut microbiome [18, 19].

Kombucha is a fermented black tea with added sugar to feed the symbiotic culture of bacteria and yeast called SCOBY, which create the flavour and effervescence of the beverage [20].

It is mentioned around the year 221 B.C. in the Qin Dynasty as a cleansing and energising drink [21] and is primarily ingested as a source of pre- and probiotics [22].

Must is freshly-crushed fruit juice that contains the skins, seeds and stems of the fruit. It is the first step in the winemaking process using wild yeasts, but is also used as a sweetener in a variety of cuisines.

Must is also an essential ingredient for the production of traditional Balsamic vinegar [23]. It is different from grape juice in that it is not pasteurised or filtered and is thick with particulate matter.

Vinegars vary in degrees of alcohol, albeit in very negligible amounts.

Sherry vinegar, white wine vinegar or champagne vinegars, start with a dilute of each substance, which of course contains alcohol.

Even apple cider vinegar must pass through the alcohol fermentation process to obtain the final product [24].

There are some non alcoholic variations available using glycerine, but these extractions are usually more costly.

Cooking or baking times - as well as the amounts of extracts used - will affect the overall alcohol content remaining in the foods.

The longer alcohol is exposed to heat, the lower the alcohol content will be [25].

Food must be cooked or baked for 3 or more hours to bring any alcohol in the food down to a minimum.

Some soft drinks contain alcohol, most likely due to their high sugar content.

However, it appears that manufacturers also use ethanol as a carrier for volatile and natural flavouring materials, which may increase alcohol levels in these beverages [26].

Why Do Foods Contain Alcohol?

Yeasts (from bread) or bacteria (from fruit) interact with sugars, creating spontaneous fermentation in which ethanol fermentation is created, as the sugar is broken down into alcohol and carbon dioxide.

In other words, yeasts convert sugars into alcohol.

How much alcohol is generated, depends on the length of time many foods and drinks are left to ferment.

Glucose is the preferred energy source for yeasts and bacteria [27], just as it is for humans.

The human body produces alcohol as a result of food and drink consumption.

Albeit rarely, this can result in endogenous ethanol production, otherwise known as a condition called auto brewery syndrome.

Carbohydrates get converted into alcohol in the stomach due to an overgrowth of yeast or bacteria [28].

Consumption of alcohol in everyday food isn't necessary for the body to generate alcohol.

Simply consuming enough carbohydrates or sugary food and drink can cause bacteria or fungi to use lactic acid fermentation to produce an ethanol end product, which can result in varying degrees of intoxication [29].

The best way to avoid alcohol in food and drink is to eat whole foods that are not fermented, packaged or preserved [30].

Alcohol can be avoided by eliminating sugary soft drinks that contain carbon dioxide, minimising breads and baked goods, the use of flavourings and condiments, alcohol free beer, while increasing the intake of fresh fruits and vegetables, whole grains, nuts and seeds.

Finally, drinking enough clean water assists in maintaining hydration levels, while eliminating alcohol and other toxins from the body [32].

It is best to drink water or other liquids away from meals so as not to dilute gastric acids, generally 30 minutes before eating or one hour after a meal [33].

Small amounts can be taken during a meal, but not in large amounts, if possible.

Pros and Cons of Eating Foods That Don't Contain Alcohol