What Causes Hallucinations in Alcoholics?

Hallucinations in alcoholics are caused by either acute alcohol intoxication or alcohol withdrawal, typically after prolonged or chronic alcohol abuse. 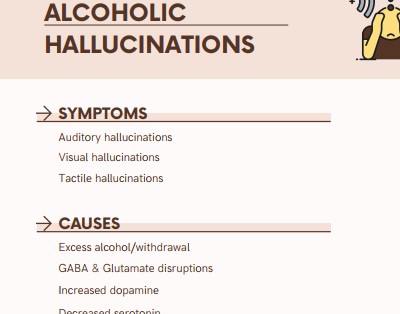 Hallucinations triggered by alcohol range from mild to severe.

They present in one or more of the following ways:

Auditory hallucinations, the most common form of alcohol-induced hallucinations, are defined as hearing words and noises—such as footsteps, doors closing, shouts, or music—that are not there.

A 2022 study found that auditory hallucinations manifesting as voices, are usually ominous, critical, and commanding [1].

In some cases, visual hallucinations are vivid and imaginative.

Tactile hallucinations are the sensation of feeling something that is not there.

These hallucinations are often described as the impression that insects are crawling under or on one’s skin [2].

It is also felt as itching, numbness, and burning.

Alcohol hallucinosis due to heavy alcohol consumption often occurs suddenly, and while drinking, without warning signs of their imminent onset.

Alcohol hallucinations caused by the abrupt cessation or reduction of alcohol are often preceded by other withdrawal symptoms.

In addition to common symptoms such as anxiety, insomnia, loss of appetite, and irritability, they include: [3.]

When Do Alcohol-Induced Hallucinations Occur?

In some cases, hallucinations occur during heavy alcohol consumption [4].

Alcohol hallucinations that occur as a severe symptom of withdrawal symptoms occur between 12 and 72 hours of the last drink.

Tactile hallucinations, for example, are a symptom of delirium tremens—the most acute form of withdrawal, which peaks 72 hours after the last drink.

Why Hallucinations Occur In Alcoholics

Hallucinations caused by excessive alcohol consumption and alcohol withdrawal syndrome—a cluster of physical and psychological symptoms that occur after drinking suddenly ceases or is significantly reduced—are due to the impact of alcohol on the brain.

These disruptions result in decreased excitability during intoxication and increased sensitivity during alcohol withdrawal [5].

Hallucinations in alcoholics are also believed to be caused by an increase in dopamine activity, a decrease in serotonin, and amino acid abnormalities.

This provokes hyperarousal, which manifests in some as hallucinations.

While alcoholic psychosis shares symptoms with schizophrenia, such as hallucinations and paranoia, it is classified as an independent condition.

In addition to hallucinations, alcoholic psychosis is occasionally accompanied by inappropriate behaviour and disorganised thinking.

How Many People Get Hallucinations From Alcohol?

Alcohol hallucinosis occurs in 4% of people who meet the criteria for alcohol dependence [7].

Alcohol dependence, or alcohol use disorder, is a psychiatric diagnosis of being physically or psychologically addicted to alcohol [8].

The risk of developing alcohol-related psychosis and the hallucinations that frequently arrive with the condition, is greater among those who drink heavily over a prolonged period, as well as those using other substances such as methamphetamines, cocaine, and psychedelic drugs like LSD [9].

Are Hallucinations Experienced By Alcoholics The Same As Delirium Tremens?

However, delirium tremens are also accompanied by physical side effects.

There’s also the possibility of alcoholic hallucinosis occurring in “clear consciousness” without any clouding of thought, while DTs are often associated with confusion, muddled thinking, and disorientation.

A 2022 study on alcohol-related psychosis found that up to 30% of patients diagnosed with the condition are at risk of developing a schizophrenic-like syndrome [13].

A 2003 follow-up study on alcoholic hallucinosis discovered that hallucinations continued to occur in 13.5% of patients who quit drinking.

However, 21% of patients did not have alcohol-induced hallucinations even though they continued to drink alcohol[16].

An earlier study, published in 1996, found that alcoholic hallucinosis continued to linger for six months in 20% of the study’s participants [17].

Additional research demonstrates a higher vulnerability to experiencing more psychotic episodes, including alcohol-induced hallucinations, in the future if one drinks again[18].

Untreated alcoholic hallucinosis has been associated with Wernicke-Korsakoff Syndrome.

How Is Alcohol Psychosis Prevented?

Hallucinations and other symptoms of alcohol psychosis and alcohol withdrawal syndrome decrease with moderation and abstinence.

Hallucinations due to alcohol withdrawal are also occasionally prevented if one pays attention to the early warning signs described above and seeks immediate medical attention.

In the long term, substance abuse treatment is an effective means to avoiding the onset of alcohol-induced psychotic disorder.

Inpatient and outpatient programmes for alcohol addiction are widely available.

Hallucinations in alcoholics caused by excessive alcohol consumption are often treated, and resolved, by the cessation of drinking.

It’s frequently urged that those experiencing hallucinations while drinking heavily should pursue medical assistance, as some cases are due to alcohol poisoning.

A patient exhibiting symptoms of alcoholic induced psychotic disorder will typically be given a Clinical Institute Withdrawal Assessment [19].

This evaluates for the severity of alcohol withdrawal symptoms and will determine the level of medical care.

Medications are frequently prescribed to aid with alcohol-induced hallucinations.

These include benzodiazepines, such as Lorazepam, to help ease the withdrawal symptoms and normalize—and stabilize—the patient during alcohol detoxification [20].

Neuroleptics, or antipsychotic medications, are also used to mitigate hallucinations [21].

To this end, nutritional help, through diet and supplements, are frequently administered to help replenish the body.

These include zinc, thiamine, magnesium, and B vitamins.

Other Dangers Of Alcoholic Hallucinosis

Hallucinations in alcoholics, whether caused by extreme intoxication, alcohol withdrawal, or prolonged alcohol use, is one of several serious symptoms that are often indicative of chronic alcoholism.

Seeking addiction treatment is the first step towards recovery. 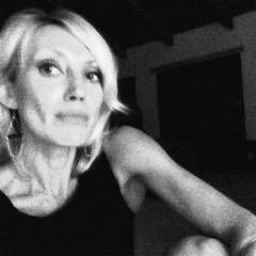