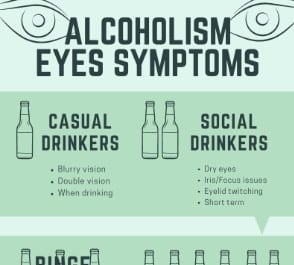 What Are Symptoms Of Alcoholism In The Eyes?

Drinking alcohol leads to the dilatation of blood vessels in the eye, which promotes blood flow [2].

The dilated blood vessels give the eyes a red, bloodshot appearance.

As the redness goes down when the alcohol has left the system, permanently bloodshot eyes are a sign of alcoholism [3].

The eye musculature is weakened after drinking because alcohol is a depressant that interferes with the brain's communication pathways, making it more difficult to keep eye movements under conscious control [5].

Weak eye muscles cause the pupils to take longer to dilate, and therefore it is harder to adjust to differences in lighting and to see different shades of colour [6]. 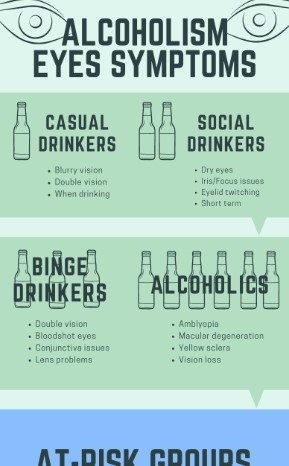 When the blood vessels dilate due to alcohol intake, the result is that they become swollen [7].

Swollen blood vessels make the eyes look red, especially when contrasted with the normal white colour of the eyeball.

A 2016 study in the International Journal of Opthalmology found that drinking increases the risk of dry eye syndrome.

This result was "independent of smoking, hypertension, diabetes and thyroid disease history" [8].

Involuntary eye movement, also known as nystagmus, is one potential symptom of alcoholism [9].

A study published in PLOS One in 2017 found that "moderate doses of alcohol can change the eye movements of young adults".

One cause of the yellowing of the sclera (the outer layer of the eyeball) is excessive alcohol consumption [10].

Drinking heavily leads to liver scarring (cirrhosis), which causes bilirubin to build up in the body and produces a yellow tint in the eyes [12].

Researchers at the University of Granada have discovered that ethanol "passes into the tear and disturbs the outermost layer of the tear film" upon consumption [13].

The 2014 study concluded that the image quality for someone who drinks heavily, is impaired, and this is particularly true with night time vision [14].

Eyelid twitching (myokymia) is a temporary symptom of drinking a large amount of alcohol [15].

Eyelid twitching after drinking can last up to several days [16].

Amblyopia (lazy eye) is the deterioration of vision in one eyeball because of failed communication between the brain and eye [17].

Some heavy drinkers experience toxic amblyopia, which is caused by high menthol consumption [18].

Age-related macular issues cause individuals to lose the middle part of their vision [20].

A 2022 journal in Current Eye Research compared macular decline in drinkers and non-drinkers.

The study found that early onset of macular symptoms is much more common in moderate to heavy drinkers [21].

The sensitivity of the cornea is reduced among those who drink heavily enough to develop peripheral neuropathy [22].

Serious eye conditions, such as dry eye, are often concealed in someone who drinks heavily [23].

A 2018 British Journal of Opthalmology study revealed that the cornea cell density of those with alcohol dependence syndrome (ADS) was significantly lower than in people without ADS [24].

Low cell density in the cornea has been linked to blindness, and therefore heavy drinking is linked with blindness due to cornea damage [25].

Excessive drinking damages the ocular tissues, one of which is the conjunctiva [26].

The conjunctiva dries out when there is too much alcohol in the body, which can cause vision damage [27].

The iris of a heavy drinker will constrict and dilate much more slowly than it is designed to.

This means the pupils of alcoholics are dilated more often than they should be [28].

When looking at bright lights, people under the influence experience a delayed pupil reaction, which can be particularly dangerous for nighttime driving [29].

The lens of the eye swells when someone consumes a large amount of alcohol.

The swelling of the lens makes it harder for the individual to see.

This change to the eye lens occurs because of an increase in blood sugar as a direct result of alcohol consumption [30].

The retina responds poorly to excessive alcohol consumption and it has been known to suffer oxidative damage in heavy drinkers [31].

The optic nerve is responsible for creating visual images, but its function is impaired if an individual drinks too much alcohol over a long period of time.

The orbits are cavities in the skull that hold the eyeballs [34].

If an alcoholic develops Wernicke's Encephalopathy, a neurological condition caused by a lack of thiamine, the orbits can be damaged [35].

The risk of developing cataracts is significantly increased in those who engage in heavy drinking [36].

Alcohol "[disrupts] calcium homeostasis in the lens", "[alters] protein-protein interactions", and causes "membrane damage", which leads to the development of cataracts in some chronic drinkers [37].

Drinking weakens the eye musculature, and damages the optic nerves [38].

As a direct result of the weakened eye muscles experienced by many alcoholics, some alcohol users have complete loss of vision [39].

The loss can be temporary or permanent, depending on the severity of the damage.

These symptoms occur temporarily in people who drink alcohol, even if they are not regular drinkers.

Once the alcohol is out of their system, the symptoms disappear [40].

However, if symptoms persist, it is a sign that drinking patterns are too frequent, or intake level is too high.

Alcohol intake is rarely the cause of the above eye conditions with controlled drinking (unless the condition is caused by another co-occurring health issue) [41].

Dry eyes affect most drinkers, even if intake is not excessive.

This is because even a few drinks have diuretic effects, causing dehydration, even in the eyes [43].

Long-term conditions such as deterioration of the macula, cataracts, vision loss, amblyopia, optic neuritis, and yellowing of the sclera, are usually only seen in chronic alcoholics [44].

People who drink occasionally, usually cannot develop these conditions as a result of their drinking.

Symptoms in other eye areas e.g. cornea, iris, retina, muscles, lens, conjunctiva, or orbit, are normally a result only of moderate to heavy alcohol use, not casual drinking patterns [45] [46].

How Do Alcoholism Eye Symptoms Manifest Differently In Different Groups?

If an individual is already prone to certain eye problems, they are more likely to develop an eye condition following excessive drinking.

For example, dry eye symptoms occur more frequently alongside age over 50, and co-occuring conditions such as blepharitis, together with drinking [51].

Instead of experiencing mild dry eye symptoms, chronic dry eye is more likely due to increased blood sugar from drinking [52].

Non-drinkers occasionally suffer deterioration of the macula, particularly if they are over the age of 50 and overweight [53].

However, long term alcohol abuse increases the risk of someone developing macular deterioration and degeneration [54].

Early onset macular degeneration may occur with prolonged alcohol use, resulting in complicated symptoms later, as the disease progresses [55].

Women are more prone to developing serious eye conditions, including glaucoma, chronic dry eye, and cataracts, all of which can be exacerbated through heavy drinking.

Women are 69% more likely than other genders to experience cataract-related blindness [56].

African Americans are five times more likely than Caucasian people to suffer from glaucoma and cataract-related blindness, especially if they drink heavily [57].

When Eye Symptoms Are NOT A Result Of Alcoholism

The risk of developing eye symptoms increases when alcohol abuse is present, and symptoms may be worse than they would be in a non-drinker.

To determine whether an eye symptom is caused by alcohol or another factor, it is important to look at the individual's family history of eye conditions.

For instance, if someone has an inherited retinal disease and their retina has oxidative damage, it is likely to be a result of genetics rather than alcohol use.

Nevertheless, it would be essential to monitor their alcohol intake to determine how much risk this is creating.

If the individual was a moderate drinker, the retina damage would not be caused by alcohol, but if they were a chronic long-term drinker, there is an increased likelihood that alcohol had triggered, or worsened, the condition.

Though some conjunctiva issues are alcohol-related, the main causes of symptoms are infection, allergic reaction, and an irritant in the eye [58].

In most cases, excessive drinking is not the the cause of conjunctivitis, even if it can cause other issues with the conjunctiva, such as loss of vision [59]. 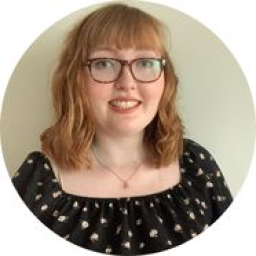