Can Alcohol Cause Brain Zaps?

Alcohol consumption itself does not cause brain zaps, rather brain zaps result from sudden withdrawal from alcohol. 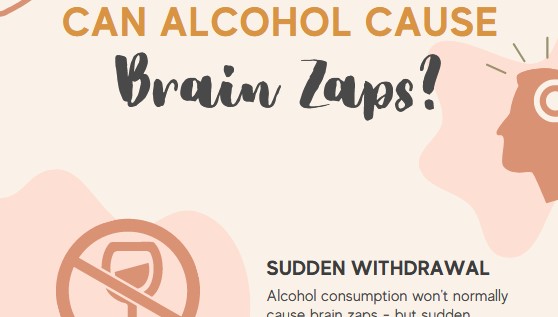 They are often confused with wet brain syndrome or Wernicke Korsakoff Syndrome [2].

A 2017 survey of 250 people who used long-term psychiatric drugs, mostly antidepressants, found that nearly half of the users experienced severe withdrawal symptoms along with brain shock symptoms, when attempting to discontinue the drug [3].

What Are Brain Zaps From Alcohol?

Brain zaps are a sudden condition that occurs during withdrawal syndrome.

Brain zaps are not dangerous to the brain or central nervous system, but are disorienting, and disrupt daily life.

Research suggests that zaps happen when an individual moves their eyes from side to side during withdrawal [6].

The effects last for a few minutes before disappearing.

Brain zaps may occur over a few weeks, based on a systematic review [7].

Individuals with alcohol use disorder or who drink heavily, can experience brain zaps soon after their last drink, due to physical dependence issues. Brain zaps are frequently accompanied by other symptoms [8]:

People who experience brain zaps describe them as a momentary sensation in the brain, similar to electrical shock [9].

Peer reviewed studies describe them as a short period of losing consciousness, hearing eyes move, a zap in the head along with a buzzing sound, a feeling of disorientation, and vertigo [9].

In less common experiences, participants reported headaches and a seizure-like feeling in the head.

Descriptions Of Alcohol-Related Brain Zaps Include [8]:

Brain zap symptoms differ in every person undergoing alcohol or drug withdrawal since each body is chemically unique.

Frequency And Intensity Of Attacks

The attack may be isolated to the brain in one episode, while it occurs in the entire head in the next episode.

It may also precede, follow, or accompany, an escalation of anxiety sensations.

Brain zaps are slight, intense, or moderate, depending on the individual.

Brain Zaps Are Not

Although some believe brain shakes are very minor, localised seizures [17], in practice, brain zap episodes differ from full blown alcoholic seizures, in that they are shorter, momentary episodes; usually experienced internally only, and do not involve whole body tremor, protracted loss of consciousness, or continual involuntary movements.

Alcohol As A Cause Of Brain Zaps

Professionals are unsure how precisely how brain zap attacks are caused by withdrawal syndrome or antidepressant discontinuation.

However the common theme is discontinuation.

Discontinuation syndrome occurs when suddenly quitting drinking or certain medications rather than weaning off slowly [10].

Thus, discontinuing SSRIs, including Paroxetine, Fluoxetine, Citalopram, Escitalopram, and Sertraline, or alcohol consumption after heavy use, cause brain shocks.

Brain zaps are not the only alcohol withdrawal symptom an individual experiences after quitting alcohol.

Withdrawal From Other Substances As A Cause of Brain Zaps [11]:

There is a common theme of sudden withdrawal from medications, altering neurotransmitter levels in the brain, as a cause of onset for brain zaps.

Who Is At Increased Risk Of Brain Zaps From Alcohol

Anxiety is one of the common causes of brain zaps after alcohol and medication-induced brain zaps [8].

Individuals with brain shivers notice that the frequency of the condition increases during periods of high-stress [18].

Managing stress and staying away from activities causing anxiety are important to prevent or treat brain zaps.

Taper Off Alcohol And Medications Slowly

The best way to prevent or reduce the effects of brain zaps is to gradually stop drinking alcohol or consuming medications, with professional help, instead of stopping abruptly.

However, evidence indicates that slowly quitting alcohol does not guarantee a person avoids experiencing brain zaps and other symptoms of withdrawal syndrome [13].

Quitting cold turkey may lead to delirium tremens, and other more severe symptoms.

This does not guarantee to avoid withdrawal symptoms in general.

Supplements are not a treatment or solution to brain shivers.

Here are some supplements that are helpful in alleviating alcohol withdrawal and brain zaps [16]: