Is There An Alcoholic Gene?

While genetics affect risk of becoming an alcoholic, there is no single "alcoholism gene."

Social and environmental factors are also important in determining likelihood of developing an addiction problem.

Extensive research has shown that genes are responsible for about half of the incurred risk of developing alcohol addiction [1]. 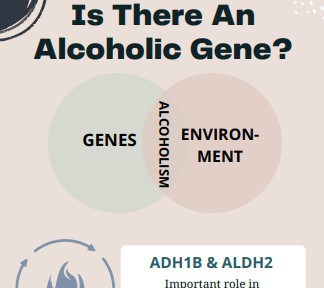 What genetic factors make people more likely to develop an alcohol use disorder?

Researchers are trying to establish which gene variants result in higher risk, and new genes are being found all the time [2].

Finding out what hereditary genes makes people at risk of becoming addicted will lead to more effective treatments [3].

Is There A Gene That Determines Alcoholism?

The ADH1B and ALDH2 genes are the catalysts behind alcohol metabolism, the process of breaking down the chemical ethanol.

The ADH1B and ALDH2 genes influence an individual's tolerance in breaking down alcohol [4].

Having minimal alcohol tolerance is called the "Asian flushing reaction," and it happens straight away when even a small amount is digested.

It causes a red face, dizziness, a fast heartbeat, and nausea.

The reason for this reaction is the ALDH2 gene, which is unable to break down acetaldehyde.

Even just a single copy of this gene means a person suffers from this reaction.

Interestingly, the ALDH2 gene is relatively common in East Asia, but extremely rare outside of Asia, with no individuals from Europe carrying this gene.

This may explain why Asian cultures are less likely to develop alcohol addiction and why drinking is more common in the West [5]. 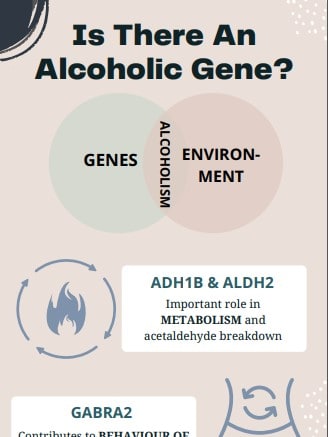 The GABRA2 gene has been linked to an increase in drinking during the transition from adolescence to adulthood, particularly in females.

The findings showed that transitions between critical developmental phases alter the impact of genetic factors on alcohol use.

The results also show that gender should be considered when studying how genes affect how men and women drink.

Teenagers with the GABRA2 genetic variant are more likely to have behaviour problems like getting in trouble with the police, fighting, and getting kicked out of school [7].

It is also linked to alcoholism and depression [8].

CHRM2 receptor activation changes brain signalling in the delta and theta frequencies, which are related to decision-making and attention.

The CHRM2 gene variation influences the brain's electrical activity and influences development of alcohol use disorder [9].

CHRM2 encourages abusing alcohol as a response to depressive and other mental illnesses.

The link between CHRM2, alcoholism, and depression is the first to show a connection between a specific gene and such sensitivities [10].

The research shows how important it is to understand how small differences in genes, leads to an alcohol problem.

Is There A Drunk Gene?

There is no "drunk gene," but there is a gene variant that suppresses the desire to drink alcohol.

This gene is known as β-Klotho (KLB).

The study that identified this gene involved 105,000 participants, and around 40% of them had a version of this gene which makes them less likely to want to get drunk [12].

This is because β-Klotho governs human alcohol use and acts as a mechanism to encourage lower intake.

β-Klotho is a receptor for endocrine hormones and is secreted by the liver.

Research shows that β-Klotho in the brain operates as a feedback circuit in controlling drinking behaviours.

Individuals without this genetic predisposition will not have the same control over drinking behaviour [13].

Is There A Gene For Addiction?

There is no single genetic component that is sufficient to produce addiction.

Rather, it is thought that alcoholism is caused by a number of genetic factors, each of which increases the risk of alcohol use disorders.

Biologically, addiction can result from inefficiencies in the dopamine system.

Dopamine is the pleasure chemical that makes individuals feel good.

The reward centre in the brain releases dopamine in response to pleasurable experiences.

The DRD2 genetic variant is responsible for an inefficient dopamine system which encourages addiction.

Consuming alcohol (or engaging in any other addiction such as gambling), produces feelings of pleasure, which raise dopamine levels in the brain [14].

Are You Born An Alcoholic?

An individual is not born with an alcohol use disorder because genes and the environment work together to determine likelihood of developing addiction.

People have alcoholism hereditary in their family, that makes them more likely to have an alcohol use disorder, but genes only make up about half of the risk [15].

The other half comes from social and environmental experiences as a child, and from life events.

Individuals who carry some of the genes that increase the risk of alcohol abuse, are more likely to become addicted to alcoholic if they live in a bad environment, such as one where they are abused or neglected [17].

Children who grow up with alcoholic parents, where drinking in high quantities and regularly, is normal, are more likely to develop alcohol addictions.

Individuals who have a family member with alcohol use disorders are more at risk of developing problematic drinking behaviours.

This is the case even if the individual grows up in a home away from the alcoholic parent [19].

In a Swedish study, twins who were adopted as children and raised separately had alcohol intake monitored.

Those who were exposed to drink through adopted relatives had a higher risk of alcohol addiction because of learned behaviour [20].

In support of genetics being a causal factor, further studies indicate that alcohol use disorder in those adopted, was more likely when they had a history of alcoholic parents.

In particular, alcohol use disorder was noticeably higher in twins whose biological fathers had alcohol addiction.

This was regardless of the drinking behaviour within adoptive families [21].

As more genetic components are found to be linked to alcoholism, these findings will be used to improve tools in assessing a person's risk of becoming an alcoholic [22].

Clinicians hope to use research on genetic variants to improve alcoholism treatment [23].