Dry heaving after drinking, often known as retching, is the body's attempt to clear itself of an alcohol overdose.

This indicates that a person has had too much alcohol and results in dry heaving or vomiting [1].

Dry heaves occur when the body wants to vomit but is unable to do so, but feelings of nausea and discomfort persist [2].

Drinking lots of water whilst retching encourages vomiting and whilst this is unpleasant, it is one of the body's protective reflexes, preventing a potentially life-threatening occurrence [3]. 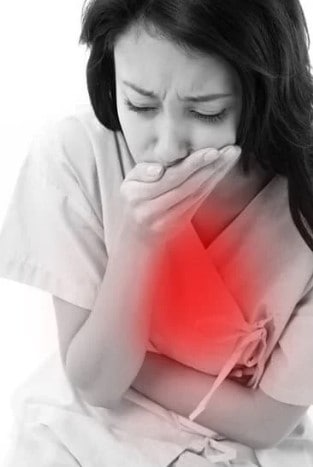 What Is Dry Heaving?

Dry heaving, or retching, is the sensation of gagging without vomiting, and is described as having the need to vomit yet being unable to.

When retching, an individual experiences the sensation and motions of vomiting without producing vomit, and is a consequence of chronic alcohol consumption [4].

Dry heaves occur during the initial phases of vomiting or afterwards and do not always result in vomiting, and develop independently as a symptom or side effect from excess alcohol consumption.

Throwing up after drinking is typically thought of as an unpleasant sensation, however an individual will want to vomit to relieve the stomach and muscles, plus this is the body's protective reflex against toxins [6].

Fortunately, dry heaving is typically only transitory, and individuals have success stopping it by using over-the-counter or home remedies, and drinking water.

Why Does Dry Heaving Happen?

Dry heaving happens when the brain keeps telling the stomach to empty even though it does not contain anything.

Retching is the contraction of the abdominal walls and diaphragm, allowing the lungs to expand while the stomach and oesophagus relax.

This drives the stomach and oesophageal contents upward and is the body's natural way of getting rid of harmful alcohol toxins [8].

When there is nothing left in the stomach to vomit, the body continues to undertake the physical motions of throwing up after drinking to rid the body of alcohol poisoning.

However, the stomach is empty and unable to expel anything other than mucus or clear fluid.

The liver transforms alcohol into a harmful molecule called acetaldehyde as the body consumes alcohol.

Acetaldehyde is changed into acetate by the liver, and the body processes acetate into water and carbon dioxide.

The liver metabolises only a limited amount of acetaldehyde at once, and if acetaldehyde levels exceed what the liver is able to handle, the body continues to retch to eliminate the extra chemical.

Dry heaving gets the body ready to throw up by reversing the flow of stomach and oesophagus (food pipe) contents [9].

Alcohol-induced dry heaving is mainly caused by binge drinking and according to the National Institute on Alcohol Abuse and Alcoholism (NIAAA), this occurs when an individual consumes four or five drinks within two hours, regardless of gender [10].

Dry heaving is frequently brought on by a variety of causes and is frequently combined with nausea, and vomiting, which share the same risk factors:

Intolerance to alcohol is a condition that prevents a person from effectively metabolising alcohol.

This is because they cannot handle too much of the byproducts of alcohol, such as grains, sulfites, and preservatives [11].

Dry heaving happens when mixing alcohol with other drugs, whether they are prescribed, over-the-counter, or illegal [12].

This is because chronic alcohol irritates the stomach lining, which makes gastritis and stomach ulcers worse [13].

This stomach acid accumulates and causes the stomach and throat to become inflamed, a condition known as gastroesophageal reflux disease.

This results in frequent stomach related concerns such as vomiting or dry heaving, diarrhoea, and stomach ulcers [14].

People who drink alcohol but have not eaten, end up dry heaving as a result of nothing in the stomach and excessive drinking.

Insufficient eating, along with heavy drinking and retching, results in famine, which decreases the body's insulin production and is known as alcoholic ketoacidosis.

A person develops alcoholic ketoacidosis if they drink alcohol over an extended period of time.

However, depending on one's nutritional state, overall health, and the amount of alcohol consumed, this occurs as soon as one day following a drinking session

People with alcoholic ketoacidosis are frequently unable to handle food for 1–3 days after drinking.

Anyone who suspects they have alcoholic ketoacidosis must seek emergency medical assistance [15].

Too much alcohol will trigger the onset of an underlying medical condition such as cyclic vomiting syndrome.

Cyclic vomiting syndrome affects all age groups, although it typically manifests in children.

Although it is more prevalent in youngsters, the number of adult cases is increasing.

The syndrome includes episodes of intense vomiting that persist for hours or days, alternating with times when there are no symptoms.

Frequently, these cyclical episodes begin at the same time of day, last for the same amount of time, and the symptoms have the same level of intensity [16].

When Dry Heaving Is Serious

Dry heaving causes dehydration and is one of the serious consequences of chronic alcohol exposure, as it impairs the body's capacity to function and causes kidney damage.

However, more severe bouts of nausea and vomiting, and dry heaving will lead to severe dehydration, which leads to tissue and organ damage [17].

Dry heaving causes damage to the stomach lining, which causes internal bleeding because it irritates or tears the lining of the esophagus causing severe stomach pains [18].

Dry heaving in combination with morning sickness, and unusual hangover symptoms such as tremors, anxiety and irritability, amnesia, body aches, and blackouts are all signs of alcohol dependence and acute withdrawal.

Blood in the mucus from dry heaving, as a result of excess alcohol is a serious condition that requires an individual to seek medical attention.

This is a frightening time for any drinker, but not dealing with it will only make things worse, so get assistance quickly, however there are numerous reasons why blood appears in phlegm after consuming alcohol [20].

Another potentially fatal reason for dry heaving after drinking is alcohol poisoning, which is when a lot of alcohol is drunk in a short amount of time.

Intoxication with alcohol is the primary cause of poisoning in England, particularly among young people.

According to the National Institute of Care and Excellence, the following are signs and symptoms of alcohol poisoning:

If a person is showing any of these signs after drinking too much, they must seek immediate medical attention in the case of experiencing alcohol poisoning.

These signs indicate a potentially life-threatening incident from alcohol overdose and need to be medically reviewed [22].

Regardless of the cause, dry heaving is temporary and harmless, even though it is very unpleasant and leaves severe pain because of the strong muscle contractions.

Retching is typically stopped or alleviated with home remedies or over-the-counter drugs.

If you begin to dry heave due to excess alcohol, stop drinking alcohol and switch to sipping water or an electrolyte-containing drink.

There are numerous home remedies for preventing dry heaving and relieving pain, however due to the fact that each person reacts differently, it is a case of testing multiple strategies to determine which one works best [23].

To avoid dry heaving, use the following home remedies:

To prevent nausea, vomiting, and dry heaving before drinking [24]:

However, if retching develops after a person drinks, adequate hydration must be maintained.

When To Seek Medical Treatment

Dry heaving is the body's trying to communicate that it is attempting to clear itself of an alcohol overdose.

When the body begins acting abnormally after drinking alcohol, it is important to pay attention.

Ignoring warning flags such as regular dry heaving for years will ultimately cause harm.

Be aware of how chronic alcohol interferes with the body and leads to dry heaving, work with it, and attempt to make a difference.

When consuming alcohol, drink plenty of water in between alcoholic beverages as this dilutes the alcohol and causes frequent urination.

Less alcohol is consumed when drinking water because it gives a full feeling, plus, this will prevent any hangover symptoms the following day.