Can Alcohol Cause Diarrhoea and Vomiting?

Alcohol causes diarrhoea by agitating the intestines and pushing the stool faster.

The digestive process becomes faster as the intestines have no time to process the alcohol, leading to diarrhoea [1].

Vomiting after alcohol consumption is the body’s way of getting rid of harmful toxins [2].

Vomiting reduces the risk of excess toxins that harm the human body, one of which is alcohol [2]. According to the National Health Service, drinking too much alcohol leads to symptoms of nausea, vomiting, diarrhoea, and indigestion [3].

Alcohol causes changes to the digestive system’s function by overwhelming the gastrointestinal tract, leading to inflammation [4].

The gastrointestinal tract is the first line of contact for all foods, including alcohol, and there is a high risk of damage by toxins [5].

Alcohol consumed in large amounts starts a process in the gut that causes inflammation in the body [5].

By overwhelming the digestive system, alcohol makes it work faster, causing food to quickly pass through the small and large intestines.

In this process, the body is unable to absorb water, leading to diarrhoea.

Diarrhoea worsens after drinking alcoholic beverages due to different reasons.

Diarrhoea Occurs After Alcohol Consumption Because: 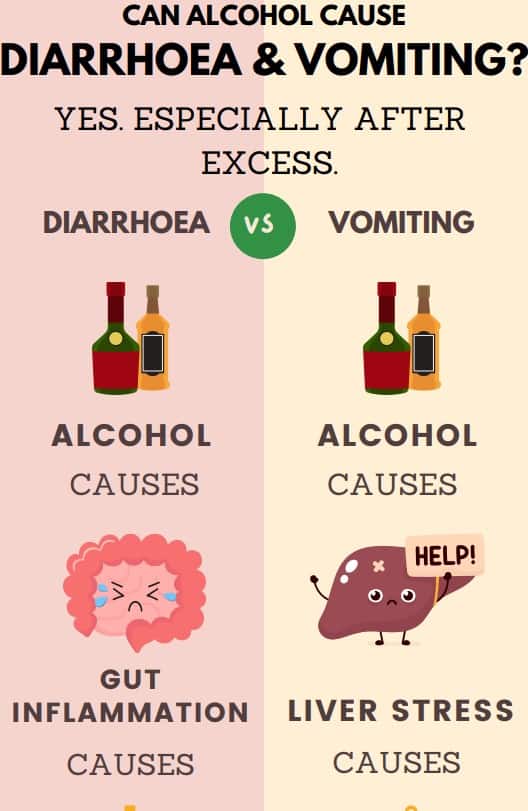 Prevention And Recovery From Diarrhoea After Alcohol Consumption

Reducing the intake of alcoholic drinks and drinking habits lowers the risk of diarrhoea after alcohol consumption [1].

Eating before and during alcohol consumption reduces the risk of diarrhoea by slowing down the absorption rate of alcohol [8].

Avoiding drinks like alcoholic beverages mixed with caffeine lowers the chances of diarrhoea.

Recovering from diarrhoea after alcohol consumption starts with avoiding alcohol until the digestive system returns to normal [6].

Drink fluids like water or broth, and avoid alcohol and caffeinated beverages until the digestive system recovers [7].

Tamara Duker Freuman, MS, RD, CDN, recommends using a preventive soluble fibre supplement before drinking to absorb the water in the bowel and reduce the risk of diarrhoea [8].

Who Is More At Risk Of Diarrhoea After They Drink Alcohol?

These patients also see blood in the stool and belly cramps [7].

Individuals that are gluten-intolerant or have a sensitive digestive tract have a higher risk of diarrhoea after alcohol consumption [1].

Those with irregular sleep schedules have a more sensitive digestive tract, putting them at a higher risk of diarrhoea after drinking alcohol [9].

Vomiting is a response from the body after drinking alcohol to rid itself of the toxin.

Avoid intentionally throwing up after drinking, but don’t stop vomiting when there is the urge to do so [2].

Intentionally vomiting after alcohol consumption increases the risk of acid reflux, strains the oesophagus, leads to aspiration when the stomach contents go to the lungs and cause damage to the teeth [2].

Vomiting feels awful but reduces the risks of having excess toxins from alcohol in the body, which is harmful to the human system.

Vomiting is one of the signs of alcohol poisoning, and excess vomiting should be assessed by a medical professional [10].

Causes Of Vomiting After Alcohol Consumption

Vomiting after alcohol consumption is caused when the body processes alcohol.

The liver converts alcohol to acetaldehyde, which is toxic to the body, and then to acetate, which the body removes in the form of water and carbon dioxide [11].

There is a limit to how much acetaldehyde the liver processes at a time, and when the levels are higher, the body removes the excess by vomiting [11].

Thus, binge drinking is a cause of vomiting after drinking alcohol.

An individual is considered to be binge drinking when they consume approximately five drinks in two hours [12].

Another major cause is if the body is unable to keep up with how much alcohol is being consumed.

Vomiting is one of the symptoms of these causes and is accompanied by other signs.

Recovering From Vomiting After Alcohol Consumption

Avoiding vomiting after alcohol consumption is tricky, but reducing the side effects and feeling better is possible.

After vomiting, avoid consuming alcohol or any other foods, as eating too soon triggers the vomiting reflex caused by alcohol.

Sleep it off and get plenty of rest when feeling hangover symptoms.

Minimise Effects Of Vomiting After Alcohol By [13]:

Complications Of Throwing Up After Alcohol Consumption

Throwing up after drinking makes an individual feel sick and is accompanied by diarrhoea, nausea, headaches, body ache, and other hangover symptoms.

The main complication of throwing up after drinking alcohol is dehydration [2].

This occurs in conditions such as alcohol intolerance [11].

Mixing alcohol with drugs leads to vomiting, nausea and many other complications, even when the person is not drunk [11].

When To Seek Medical Help

Diarrhoea and vomiting are common effects of drinking alcohol and are resolved after home care, rest and consuming fluids.

Vomiting goes away within 24 hours, and diarrhoea is expected to stop after a few days.

When diarrhoea is severe and persistent, it leads to dehydration, which is life-threatening when left untreated.

Diarrhoea and vomiting are hangover symptoms caused by the consumption of alcohol.

Diarrhoea is caused by the effects of alcohol in the digestive system, while vomiting is due to how the liver processes toxins.

The symptoms of diarrhoea and vomiting are managed through home care, rest, and drinking clear fluids.

Individuals with pre-existing medical conditions suffer more from diarrhoea and vomiting after drinking alcohol than others. Excessive alcohol consumption can worsen these symptoms.