3 Factors that Contribute to an Addictive Personality

The issues and controversies that dispute the veracity of an addictive personality have confused a lot of people.

Is there such a thing?

And if there is, what factors contribute to its making? It is an interesting topic because people are not simply curious. They’re also bothered by the possibility that they may have an addictive inclination and succumb to it at some point.

Before tackling the issue of the addictive personality, a definition is in order. And even in this matter, not all experts in the matter are in agreement. In 2015, social work experts suggested banning the term permanently. (1) The phrase has a negative connotation and it marginalises and puts a stigma on the person described as such.

Dr. Michael Weaver, a professor of Psychiatry and medical director of the Center for Neurobehavioral Research on Addictions at the University of Texas in Houston, has this to say about the controversial terminology.

According to him, the addictive personality is not an actual diagnosis. However, there are factors that, when combined, increase the likelihood of a person becoming addicted. Some of them are intrinsic but others can be eliminated if people are aware of what they are up against.

According to Dr. Mark Griffiths of the Psychology Department of Nottingham Trent University in the United Kingdom, addiction is never healthy. It is destructive to one’s life and is present when a person exhibits the following behaviours: (2)

When addiction criteria is measured by a set of behaviours, what then drives a person to behave in this manner?

What makes some people predisposed to addiction and others not?

Several studies have been done on this subject in order to formulate better approaches to drug rehab, the prevention of addiction and discover new or modify current therapeutic interventions. Here are their findings.

Factors that make an addictive personality 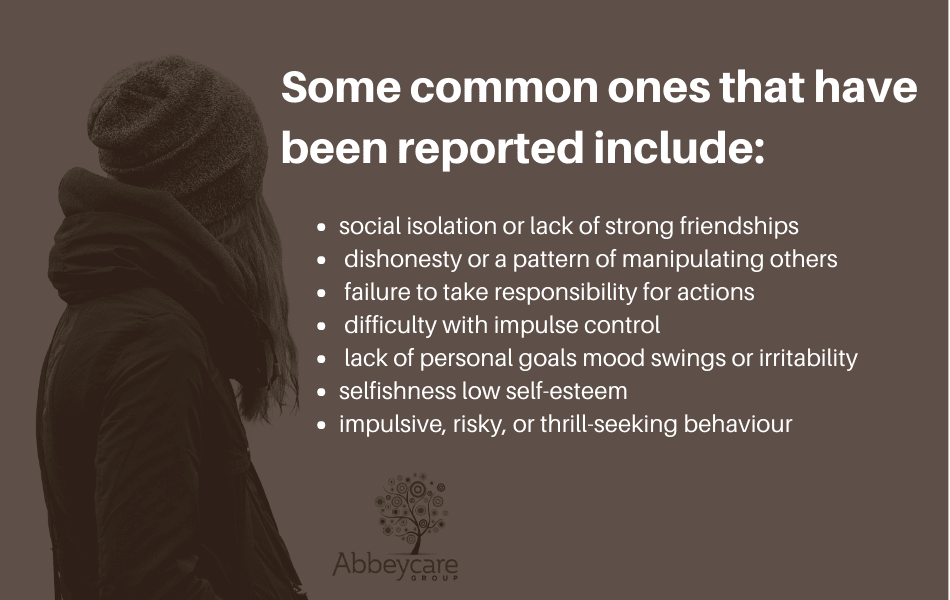 Factors that Contribute to an Addictive Personality

ONE: Genes and epigenetics

Most studies conclude that genes have a moderate to high role in addiction predisposition. These studies are done on families, in adoption cases and on identical twins.

They reveal that, although environmental factors and epigenetics influence the addictive inclination, genes for addictive disorders are heritable, as they are for other psychiatric disorders like schizophrenia and depression.

Scientists have found that 40 to 60 percent of a person’s vulnerability to addiction is attributable to genetic factors. Further studies show that substances have varying degrees of heritabilities, for example, hallucinogens have the lowest heritability while cocaine has the highest. (3)

Another element that is vital to the addictive heritability is epigenetics, the external changes in genes as a result of a person’s behaviour and the environment. Epigenetic changes do not affect the DNA sequence of a gene. It only affects how the body reads the DNA sequence.

Circumstances like the end of a significant relationship or the loss of a job are stressful. This stress can cause epigenetic changes on the individual that encourages the development of drug addiction.

Fortunately, epigenetic changes are reversible because they have the ability to respond to behaviour and environment. Positive stimuli, such as engaging in physical activity, promotes favorable feelings and reduces stress, which in turn minimizes the cravings for the addictive substance. (4)

The environment one lives in can increase the propensity for addiction. From childhood to the teen years and young adulthood, there are many elements that push a person towards addiction.

Child abuse may be emotional, physical or sexual. Neglect is also one type of child abuse. Whatever form it takes, it becomes traumatic because the child has no control over it. A study of addicted adolescents found that 70 percent of them had been exposed to trauma in their childhood.

Emotional abuse is verbal, mental and psychological maltreatment of the child. It is demonstrated by constant and chronic ridiculing, insulting, or terrorizing and threatening violence, restricting the child from socialising, isolating or deliberately ignoring the child for a long period as a punishment.

Emotional abuse is a repeating pattern that is carried out by a parent, caregiver, a teacher in school, or any adult who is entrusted with the child’s care. It crosses all cultural, religious and socioeconomic boundaries and may not be apparent to people outside of the home.

Emotional abuse is most often present with another form of abuse.

Physical abuse is the intentional physical harm done to the child through beating, punching, kicking, slapping, choking, burning or any other form of inflicting injury. The beating may be by hand or other objects such as a stick, a belt, or a piece of furniture. Burning may be done by throwing hot water on the child or by cigarette butts.

Physical abusers are usually a parent or foster parent, or a caregiver.

Sexual abuse of a child can be through rape, molestation, indecent exposure or using the child for pornography or prostitution. Most cases of sexual abuse are perpetrated by people the child knows or by strangers. In the former, it is usually a friend of the family, the father or stepfather, neighbor, teacher or coach, or a leader in a religious group. Most perpetrators are male.

Child neglect exists when the physical, social and emotional needs of the child are not provided. These are food, clothing, a safe shelter, medical and dental care, education, supervision, and love and emotional support.

Studies of the brain of children exposed to childhood trauma and neglect show anomalies in the brain structure that led to impairments in cognitive and behavioural functions. These were the result of being in a sustained state of stress with the brain disruptions observed in a neurological scan.

Aside from the trauma directly experienced by children, exposure to domestic violence is also a great stressor with the same impact on the brain structure. These brain anomalies are believed to contribute to their penchant for drug addiction. (5)

Exposure to drug or alcohol abuse  at an early age

In most cases, these children are victims of emotional, physical and sexual abuse. They are also deprived of the basic needs of adequate nutrition, medical care and proper education because the family’s resources are spent on acquiring the drugs and alcohol.

Parents who are drug or alcohol dependent neglect their child’s wellbeing. They fail to form attachments and communication which are vital for psychological, emotional and mental development.

There are no family routines and structures that provide a sense of security and order. Finances are diverted to feed the parent’s addiction. The home environment becomes one of conflict, violence, fear, abuse and chaos.

Although most studies on a child’s exposure to parental substance abuse are on alcohol, researchers suggest that children of parents addicted to heroin or cocaine have a greater likelihood for later dysfunctional behaviour and addiction. (8)

Early intervention with cocaine detox of an addicted parent will go a long way to saving a child from possible addiction.

Researchers at Michigan State University surveyed teens and young adults with an average age of 16, 22, and 29. Their findings showed that teens who can easily gain access to drugs or alcohol in their homes were more likely to use them at a later age.

The survey further found that, where these substances were available at home, white male teens had a greater chance of using drugs than the Hispanics, Asians and Blacks. (9)

Substance abuse generally starts during the teen  years, from 15 - 18 years of age. Psychosocial factors such as peer pressure, influence of celebrities using, and the curiosity of experiencing the touted enjoyment and euphoria are associated with the initiation of substance use.

Peer pressure is a very significant issue in the adolescent years. The need to fit in, belong to a group, or the fear of ridicule or being shut out if one doesn’t go along make children and teens succumb to peer pressure.

But negative peer pressure is harmful. When a child has to engage in risky behaviour, such as drug or alcohol use, the likelihood of becoming a drug dependent is great.

Many times, initial drug use leads to maintenance that results in drug dependence. For the young, their reasons for taking drugs are the wish to relax, to remain awake and stay energetic for social activities, to enhance experiences, escape depressive mood, and avoid facing family and relationship problems. (10)

People with substance use disorder have been found to have common or shared personality traits that make them prone to addiction. In one study done by British psychologists, they attributed the addictive inclination to the following specific personality characteristics, basing their findings on the five-factor model, impulsivity and excitement-seeking behaviour. (11)

An individual who is always worried and tense will use drugs as a coping mechanism and a way of avoiding what is perceived as problems. Neuroticism has been related to impulsive risk-taking and harmful behaviour.

Openness is generally a positive trait. It makes people discover new experiences and thoughts, and are more in touch with their inner selves. Openness makes for warm and loving relationships.

But when openness is applied too liberally, risk-taking behaviour becomes harmful, such as trying illicit drug use not for medicinal purposes. Illicit drugs are addictive and the danger of becoming dependent on them is the downside of being open to novel experiences without limitations.

People with impulsive behavior want instant gratification. They seek instant rewards which push them to use drugs. When drug addiction develops, the ability to curb impulsivity further diminishes.

On the other hand, compulsivity is behaviour that is repeatedly done to stave off negative feelings even if the behaviour is harmful. Compulsive behaviour is habitual, such as the constant washing of hands to avoid feeling dirty.

In addiction, the compulsion to use drugs or alcohol repeatedly comes not from seeking temporary pleasurable feelings but from avoiding the withdrawal symptoms of not using.

Sensation-seeking people look for experiences that are new, varied and intense to capture a different type of feeling. They are willing to try deviant events such as using illicit drugs for adventure and thrill and are prepared to accept the physical, financial, social and even legal risks that the experience brings. They are easily bored by the conventional and ordinary. However, their nonconformity does not make them set goals that traditional society values.

Aside from these personality traits, a person who has low self-image, pronounced depression or anxiety, and has no adult supervision in the growing up years is at greater risk for drug addiction.

The addictive personality is not a single entity or may not even exist, as some researchers point out. But an inclination towards addiction is real and research is ongoing to discover more about it. The studies on genetics, environmental conditions and certain personality traits in relation to an addictive predisposition are vital to the application of effective treatment methods to prevent drug addiction.

Addiction is a serious matter and should be handled by professionals. Drug detox done at home and without medical supervision is dangerous. The withdrawal symptoms will lead to a relapse at best or may be fatal, at worst. Drug or alcohol rehab carried out in addiction facilities have the greatest chance of success in treatment, enabling the person to regain responsibility and sobriety.

We use cookies to ensure that we give you the best experience on our website. If you continue to use this site we will assume that you are happy with it.OKCOVID-19 Information